"Tommorow Is No promise --It Is A Belief"

"Tommorow is no promise --it is a belief "

Actually the truth or matter of fact in todays world with the amount of ways to express love ,,with the ever increasing social networks ,electronic gadgets ,,being in touch every minute  has become a distinct possibility -- reasons that eventually lead to lot of break ups -misunderstandings ---communication gap in frdships and relationships --the aftermath of such a occurence is the one which shapes u into a person for greater things in life --You fall or rise exactly after these moments
Getting hurt is a painful experience no one wishes to have --but it is a way to test your inner strength --i have seen people broken absolutely to pieces after just one incident and have seen acceptedly lot few ppl who took it as a challenge to write their own destiny by sheer guts and determination ,,that is sumthing not taught by anyone --it is in u ---just as noone teaches u to love these things need not be taught --"The fire has to burn in you --full stop ".
Its hard to comprehend what goes through sumones mind --but i can do that to me --just few years back --i had a sister like relationship with a girl who mesmerised me with her undbinding love--to a stage where i could not imagine a world without her as sister --Seperated by a year --the relationship was perfect epitome of the word"Platonic relationship"--but eventually it all ended in few moments that  i was absolutely shell shocked  not knowing what to do --i fought with her desperately --i felt i had lost part of me --i was speechless sumtimes to accept the reality that its over --but sumhow with help from couple of my online friends i got the feeling that "If its over it aint over for  my life"--I saw that "In life it is inevitable that people who are not meant to stay in your life  will never stay "
"Sorry"--the final words i still remember so vivdly that made me feel bad and strong at same time --bad that i had lost sumone who loved me so much --strong that imwas gona find what im made of  after all this .
It took me almost a year to come out my self imposed exile --to defeat my demons was probably the biggest challenge i had yet faced --yet it never perturbed me to the fact that i had to run desperately to that same person to quell  that challenge --that was my moral victory over sumthing that almost drove me mad --life doesnt teach u this part -it gives u such situations to see what u can do with it --"Whether u see it as a opportunity to make urself a  stronger ,better person or Whether u r just as brittle as anything else in this world which can break at the earliest point of time possible  --there in lies  the millimeter difference in becoming what u want and letting sumone to destroy what u can "
I have had subsequent incidents like that but after  that incident i have never felt as bad --life seemed far clear -i got this feeling  that " Im not here to satisfy every one in this world --sum might take me wrong --sum might take me good --the only thing i can do -is try being true to myself --rest is left to god ,,fate and my destiny ,,Sighning off with the quote i wrote after ending (hope temporarily)of one of my supposedly best friends ,pal and brother .
" With what u wrote Im hurt --Im broken but despite whatever i know i will move on  for my destiny is not written by you to be ruined when u want --I will soldier on --a little more unsure -- but thats fine " 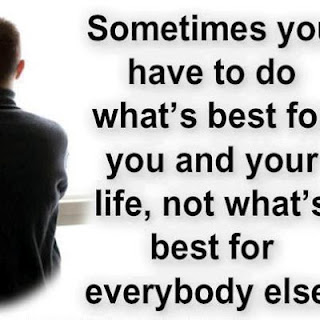 Copied and posted in dedication to one of my close frds whose arranged marriage was destroyed on the last minute by few silly,silly  incidents !!

After persuasion  to write what he felt in two nights he felt his life was altered slightly --my frd a pretty average writer felt it was fine --and i thought it would be apt to just copy it and post it in my blog ,,because it was that real to me !!

One night -
"  For once i was living in a dream sumone was dreaming -it was out of the world feeling
My truth was sumones rule book for a change --i never found a reason to wake up
The stars in the night light were like witnesses to this beautiful dream i was living
Sumbody gave my heart's rights to skate around --it did so merrily
The next dawn seemed the most beautliful scene i could imagine
Sumbody's voice seemed like the magical trap i fell wantedly
I was wanted desperately by sumone --even time stopped moving
Sumone was madly in love with me - giving me no reason to deny
For first time i realised true love doesnt need yrs,months ,days ,just HOURS
I knew it was hard to believe but when u r being loved truly who can
Sumbody was refusing to forget me for a minute - I was crazily happy
"Im all urs for life "-she said -i was seeing myself in mirror and smiled endlessly
It was roses everywhere --my life was a garden that night-i was in heaven ,,,,


The following night ,,,
"Im now wide awake --my eyes refuse to close even --where will i dream now ?
Sumone's lies have won over my truths --I have another reason to cry
The stars in the night light were like mocking me at my reality without you
My heart was screeched to halt by a unknown force -it was yearning  not to be so
The next dawn seemed the toughest morning i could ever have faced
I was searching for that "Sumbody's voice" to fall into that trap forever
I was avoided shockingly despite being loved truly -every minute seemed like yrs
Yes true love needed just hours but to forget that love it surely will take years
I did not know that u can be forgotten easily despite loving sumone truly
Sumbody was trying to forget me for life despite loving me  --i was crazily shocked
"I was never meant to be urs "-her silence seemed to say to me
I was seeing myself in the mirror --tears flowed endlessly
It seemed thorns everywhere --my life was again a deserted forest once again
----i was in hell again !!\

Possibly the truth of these words  was understood when i saw through the persons moist eyes ---he had felt true love in one night and rudely broken by the girls dad for reasons  best known to him,,despite knowing the girl loved the guy and the guy was pretty decent guy perfectly acceptable for her love --but the startling flip sides of a arranged marriage stood right in front of my eyes when he was describing the facts with utmost pain ---i felt for a moment its better to choose ur destination than to wait for sumone to show u that--i was left  with no words to console a troubled soul than wishing that god hears the unheard tears of his heart and of his girl who loved him truly and magically --time might have been short but the way he wrote this and gave to me without a thought showed how true it was (note the synchronisation of words in both paras --exactly depicting the torture he went through by cruel fate )
All i can say is if u know sumone is loving u truly --never ignore it -because sumwhere sumone is watching --oops forgot finishing with the last lines he wrote in his piece of paper
" That one night my heart skated unbounded and happy  --a  testament to ur true love
Im priveleged to be the reason of that -noone can take that away from me " 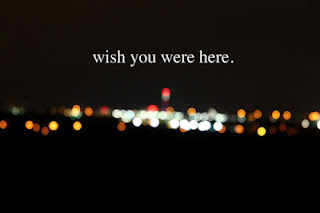 Without u im struggling this night but i know tomm is new day !!

Possessiveness Is Just The Outcome Of Love --Definitely Aint A Crime !!!!

--A inspirational friend long time back--Probably the first time i realised what is the meaning of this word "possessive"--Recently i happened to witness a heartbreaking break up of lost untold love of a very good writing friend of mine-whose love i noticed the first time i interacted with him ,so madly was he in love that when  it all ended in unbearable pain the truth and pain  was obvious even for me that it had hurt him pretty badly -a few instances in life came up in mind when analysing the incident with the friend
What is actually being possessive ---The time when your"Excess love on one person leads to sole focus on that person --thoughts ,wishes,dreams ,time ,everything points in cohesion with just one person --when ur happy moments and sad moments wait for exact reaction you expect from that person --u r invariably bound to become possesive of that person --everything is fine till the other person feels things the exact way beyond a certain period of time ,the moment the other person starts to feel differently --things take up a  bad turn leaving plenty of pain --there in lies the secret of logeivity of any relationship
There was once this  unforgettable girl in my life whom i felt as  a real sister --without whom for a certain period of time the world seemed a impossible place to live--my heart jumped in joy the first moment i interacted with  her ---mutual calls --mutual excitement --mutual feelings matching called for spending more time together--more sms -more gift exchanges -card exchanges on birthday time -it was supposedly one of the highlights of my life until reality set in -possesiveness set in and  our relationship became a strained one eventually ending prematuredly and lot painfully -We hardly realise during such times that things happening too fast for them to last forever --eventually everything that was mutual becomes monotomous --with one of the two parties feeling the strain to live upto the others expectation -slowly spacing out from other becomes the only possibility to extend the relationship-and eventually breaking up  ,,however hard it may seem ---it is a truth hard to accept but not impossible to deny .
Possessiveness gives u hell a lot of tears ,,hell a lot of pain after the eventual absence of that person u loved more than anyone(saying from personal experince too --it seemed a awful time for a short period of time )--but despite all the negative aspects it brings --it has hell a lot of positive things

When my friend spoke abt his break up --i wanted to say this -- possesiveness is not a mistake --it might be a painful experience when u feel bitter after a break up with ur loved ones --but its a lesson to resurrect urself when life gives u another opportuniy --Enjoy loving sumone to the core --it might eventually turn out to be a mistake u wished u had corrected earlier but without trial and errors life is as boring as it gets .Signing off from a exclusive quote yrs back  from a frd who is sumwhere in this wide world but remem his words he shared with me long time back about feeling helplessly possessive abt sumone  he loved then -- 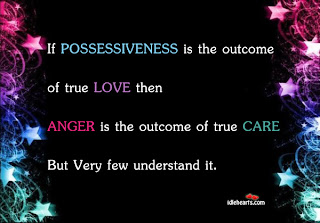 --Always find a positive in every worst feeling ,,bcoz if it cant get  any worse it only means it will get better!!!